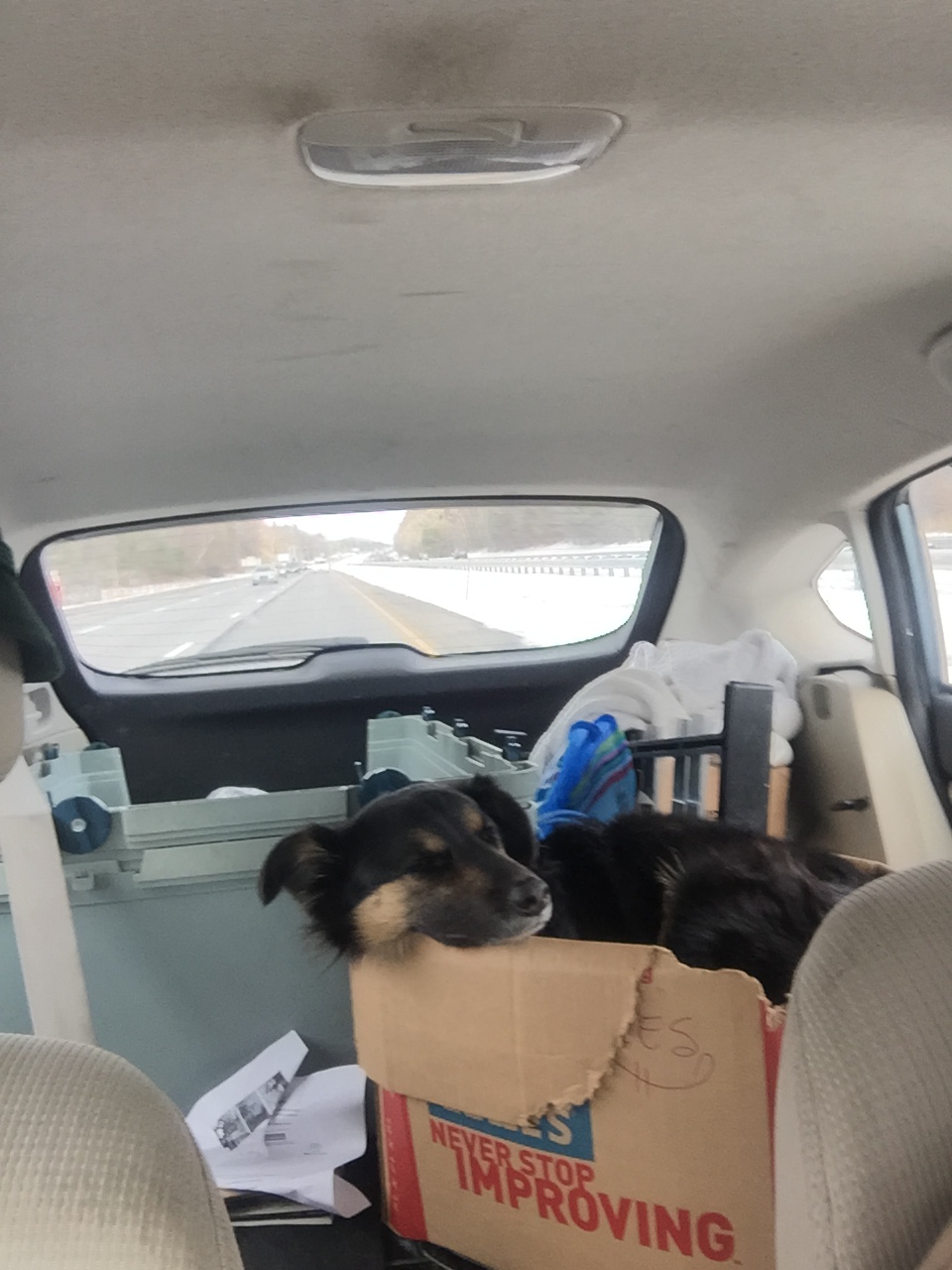 I really didn’t want another dog.

Y’know that old joke, the one where various people are having a discussion about when life begins (conception, etc), and the old couple has the punchline about life beginning when the kids move out and the dog dies. At this point in my life I’m still not looking forward to when the kids move out,  nor do I want the current canine to croak, but when my previous dog died, I have to admit that I was in no hurry to get her replaced.

I had had my own dogs since my junior year in college. After around 35 years of owning various hounds, arctic breeds, retriever crosses, herding dogs, my 16 year-old Australian Cattle Dog, Maddie, was euthanized on a 4th of July. This was just slightly less than a month before my best friend died after a bout with a cancer caused by the radiation that had cured his previous cancer around 20 years earlier. When Mike died, we had been friends for nearly 4o years.

It’s not an astounding revelation that you don’t get to go back to sixth grade and make another decades-long best friendship. You’re just stuck with that permanent sense of loss that occurs when you realize nothing can ever be the same again.  I will never have a best friend who was around since I was 10. I suppose that this isn’t astounding. We all know it will happen. Everyone gets to this point, some reach it quite early in life.

Mike had just turned 50, and I was just about to do the same.  Plain and simple, I didn’t want another dog. As a veterinarian, I had usually counseled clients to get back into the saddle (more often than not a new pet helps ease the pain of the loss of the old one), and although I had always followed that advice myself, when my best friend died I decided that I was done. I wasn’t in the mood for any more loss. Life brings enough loss without going out and purposely adding to it.

But Jolee bugged me. And bugged me. And then bugged me some more. And went after this the way that only a child who wants a dog can. Then she started finding dogs on PetFinder.com. She worked on my guilt about the divorce. And then I broke. I should’ve known better. I’m a veterinarian, the guy who is on the other side of the exam table when the exasperated parent–usually a mother–comes in and says, “I told them they could have a dog if they would help take care of him!” To which I usually answer, “And you had what evidence to actually believe this claim?”

The truth is that no matter how much kids promise, they are going to fall short. Usually they are going to fall way short. And then they will probably leave for college before the dog dies, which means you’re stuck with the difficulties of caring for the old dog, with his arthritic joints, incontinent bladder, bad eyesight, and failing cognitive abilities. The kids are alright: they do have good intentions. They just have really poor followthrough combined with an inability to accurately assess their desires and capacities. There are a lot of stories about the strong bond between a child and a dog. But no one writes stories about when a child’s interest in the dog gets hijacked for interest in something else (sports, hormone-induced wackiness, cars, music, delinquent behavior. . .) The problem is that it takes forever to say no, but just a few moments of delusion or weakness to say yes. And in general,  parents love to say yes.

But I’m digressing. This is about my son’s birthday, my dog Kaleb, who is a total maroon, and the chocolate cake.  Every 16 year-old should have a chocolate cake for breakfast on this momentous occasion. Took it out of the refrigerator, put it on the counter, put the 17 candles on (one for good luck), and went upstairs to brush my teeth. Return downstairs, and Genius Mutt is licking the last bits of crumbs off of the floor.