No breakfast in bed, no sleeping in. I had to work on Father’s Day.

Before you start knitting your brow with sympathy, you should know that I teach sailing. It’s not like I sit in a cubicle, wondering why the hell I’m sitting in a cubicle on a beautiful day in June. I’m out on the water, loving life and trying to teach adults upwind from downwind (which can be astoundingly difficult for some).

My son was working from 3-8. He doesn’t drive, and I was going to be out on the water. I had to ask the former wife to drive him to work. She said that would be OK, but I had to leave him at her house overnight, because it’s too much trouble to drive to my house, all of less than 2 miles from her house. My daughter was already staying at her house that night. She doesn’t always tolerate the level of disorganization that I can, and that’s OK (and another subject).

I ignored the request and had my son sleep at my house anyway. I can’t count the number of trips I make every week over to the other residence, to pick them up, to retrieve a needed piece of homework, to get shoes for my 13 year-old daughter, who inexplicably arrived at my house without suitable–or sometimes any–footwear.  But the disparity in number of trips made is another raspberry seed in a stuck in a molar. Forget about it, it falls out eventually.

I knew I’d be out of the house hours before my dormouse of a teen-aged son even cracked his eyelids a wee bit open.  That didn’t matter. I don’t really need much for Father’s Day. In fact, I only need one thing: a single wish that I have a happy Father’s Day from both of my children.

That’s what I needed. I wanted a little bit more. I wanted to wake up with at least one of my children in the house, whether or not we’d be able to exchange good mornings. I can’t explain, but it meant a lot to me. I live far from my family, in a part of the country where I don’t have deep roots. Waking up  alone in a house on Father’s Day? I didn’t want to give myself a chance to brood about that idea. I’m very good at brooding.

Before I left for work, I wrote a note to my son: don’t forget to call my dad, my step-dad (if he hadn’t been seeing his mom later, I would have reminded him to call the former wife’s dad, as I have always done in the past), and to walk Genius Mutt.

This simple act made me feel contented as I left the house. It was the cherry on top of waking up as father, a child of mine asleep in his room. But it got even better: when I picked up Sam after his work, I learned that he had actually done all three things. Off to Smashburger and Ben & Jerry’s.

When I got home, my daughter was waiting for me. She was concerned that she hadn’t seen me yet, in order that she might wish me a happy day. She also wrote a letter to me–unintentionally sounding like it was torn from a page of Ulysses–enumerating the reasons why I was the best dad in the world. 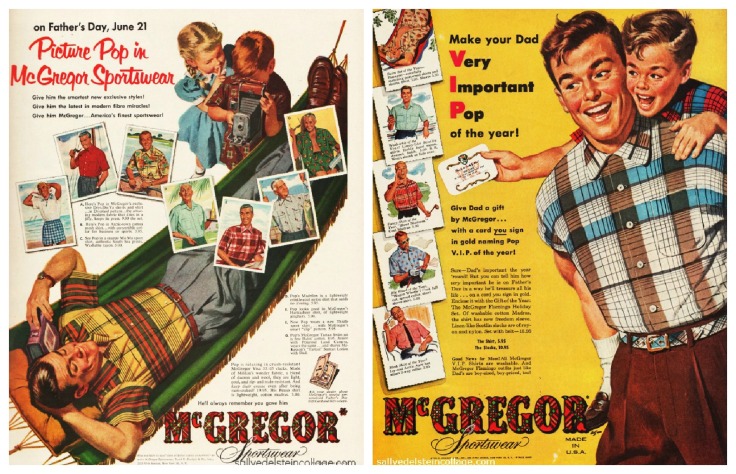 Another pile o’ professional papers. Away they go. About half of these papers were about “exotics.” Technically, it means an animal that isn’t native to the area, but in small animal practice it means something that isn’t a dog or a cat.

There was a point in my career when I thought that I might see rodents, hedgehogs, sugar gliders, and birds. I have treated them, but so sporadically as to not feel really comfortable doing so. If there’s a veterinarian on staff who isn’t in that day and the condition isn’t an emergency, I’ll have that vet see the animal.  I’ll try to refer the animal to another clinic if where I’m working doesn’t have someone who sees these guys regularly. 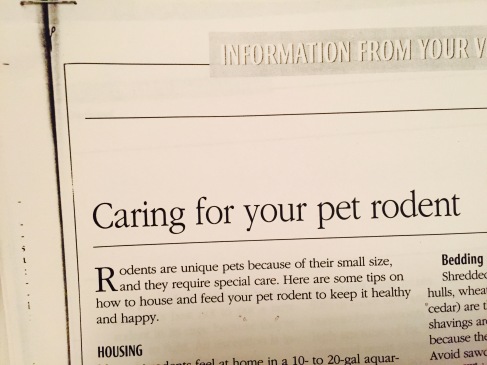 Most veterinarians hate to do that. They are sending business elsewhere, and they are not sure if it will come back with the other animals, or when a doctor who likes to see exotics is on staff. I have been told by employers that I will see these animals, my level of comfort be damned. It can be a problem.

We disappear from time to time.

Personal issues of the staff, like divorce, other jobs, and puppies that refuse to housebreak have been keeping the staff occupied.

For example, one of our most reliable writers sent us this note: “The divorce is final, but the   plaintiff’s attorney still wants blood, flesh, and, yes, more filthy lucre.”

Life has been rather tough on the Meta-Bug editorial staff since the last post.

The former spouse of the above-mentioned writer has grown even more hostile since the divorce and the last entry, written nearly a year ago. It’s a mystery to us all.  The vast majority of the staff wants to get on with our normal business, but the man-hours required to devote to the very real problems of their personal lives (we realize our workers actually have lives) have left little time (not to mention funds, for we are self-funded) for our team of crack investigative reporters to go out there and get truly interesting and important stories. It seems that some of our staff is just unlucky (flooded basements). Some are overworked. And for the ones going through divorces, well, seems that some folks just can’t let go. They revel in the fight. To this contributor, it appears like refusing to admit that the plate of elephant manure and crushed-up cockroaches you’re eating isn’t actually worse  than the nice bowl of gelato that’s sitting right next to you: “I really like this,” you say. “Now get that fucking fior di latte and stracciatella out of my face before I really lose it.”

However, we did get an editorial out of all of this:

Some day an enlightened public will have to wrest this from the hands of the divorce attorneys, while they kick and scream and predict the death of society. It probably won’t be the death of society, but it will be the end of the world as we know it, and that is more than fine.

Because we are so nosy, we picked up this piece of writing on a crumpled piece of paper from the courthouse floor:

Today I saw a grown man handcuffed in the courtroom because he was unable to pay his child support. He started to cry, but the judge didn’t really care. If what he says was true, then he was paying all the money he had for child support. So who will benefit from his incarceration? The children? I can’t imagine how. The former wife? Well, I’m sure that going to jail and losing his job will enhance his future earning capacity. She may have a need for vendetta, may feel that he has it coming, but she’s probably acting from her worst self, or her only self if she can’t separate herself from this side of her.  I suppose some smug prigs will be satisfied at seeing this man who has no experience with the criminal justice system tossed into jail, satisfying her worser angels. Bully for her…

I saw another guy at the clerk’s desk, he was showing his pay stubs and how they were less then the weekly amount owed on child support. He was from the former Soviet Union, and seeing the machine just turning and churning, regardless of the circumstances, made him feel like he was in Moscow once again.,,

Do the powers that be really think that children can be isolated from the conflict that an adversarial system encourages? In court I heard a lawyer, tell the judge that charges $460/hour. This same judge didn’t flinch, even though he said something about “reasonable lawyer’s fees.” By what I see, this lawyer has absolutely no control over his client, or perhaps he is even encouraging her to continue litigation in order to pad his own wallet. What’s amazing, truly astounding,  is that he probably thinks he’s actually worth it. He doesn’t seem any brighter than the average bear, and I so far a lot of his strategy seems to be throwing lots of motions and paperwork at the process. The other side complains that much  of it is illegible, which means that they need to call him to fix it, and then the cost of the whole deal goes up, since he’s clearly the type of lawyer who doesn’t let a minute of his day go unbilled. The plaintiff’s lawyer seems to be taking the case personally, as he has developed a rather un-lawyerly tendency to lose his temper when talking about the defendant.  He works for a fancy-schmancy (which is two grades higher than merely “fancy”) law firm. I have heard of it. They have very nice offices with good views, glass conference rooms, stocked with all sorts of things with their logo on it, including the napkins that their clients use to wipe the crumbs from their faces. Do these self-congratulatory surroundings improves their ability to win cases for their clients?

I’m willing to hear from others, but from where I sit the answer is a simple, “no”.

I have 273 1st degree connections. Some of these people I actually know, but others are just strangers caught in a net thrown in the general direction of my so-called career. I did get one writing job through the site, but–as with most writing jobs since the advent of the internet–it wasn’t worth the trouble. I have found some old friends that I wasn’t able to find through facebook, and for a while I was getting a few notifications of interesting job openings.For some reason, those have stopped, and even if I click on the “jobs” link, I get the following message:

If I do a more specific search, say “veterinarian”, I get 11, 401 results. The first 3 are Medical Records Director, Nursing Assistant, and Physical Therapist.

My favorite (on the first page, because with these results I’m not going to bother going beyond that) is for Senior Management Consumer Insights for Fruit of the Loom. Well, I have been wearing underwear for more than five decades now, but I imagine with just that qualification I have a lot of competition, many of whom may change their underwear more often than I do (once a day, whether I need to or not).

My favorite part of LinkedIn is the endorsements. I have been endorsed as proficient in Social Media, as well as Research, by someone who only knows me from a short and disastrous relationship, and for Public Health by someone my son took tae kwon do from over 5 years ago.