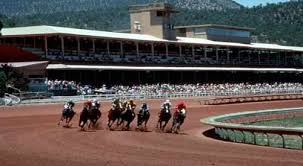 Sometime around 1996, I went to a workshop called Writers for Riding. It took place at Ruidoso, home of Ruidoso Downs, once an important place in the world of quarter-horse racing, and now just another fading track near yet another Indian casino.

Was the conference a scam? Maybe yes, maybe no. There used to be turf writers in the US. but this wasn’t about turf writing–it was just about horses as a centerpiece to write around. There still are turf writers, but they are a dying and diminishing race. As one turf writer wrote:

The truth is, there is not that much racing media left, at least from the traditional standpoint of the daily newspaper. In fact, horse racing hardly exists in many American newspapers that used to employ one or more full-time racing writers and handicappers. Feature stories, outside of the Triple Crown, are few and far between, and many papers in racing cities have stopped publishing handicapping selections, entries, and results.

I found a canary yellow legal pad with some scrawls on it today. I am dumping stuff (see The Great Book Sale), but not without a moment’s reflection.

We all stayed in large rented condo. Who was there? Carolyn Elkins, who was my friend for a while, was there. She came with her sister, Marilyn. (Oddly enough, the trip was to be  life-changing for Marilyn.)  There was a Rebecca, from Arkansas, and a Becky, who was older and if I remember correctly had skin deeply etched by the sun.

After our initial excitement at meeting each other and the perfunctory politeness, the personality element is beginning to insert itself. The sore spots are starting to wear. The Olympics were on, and Becky could not resist making fun of the synchronized swimmers, especially the inverted legs-out-of-the-water splits maneuver. She used language from porno magazines. But when I suggested that the Olympics should be performed as they were in ancient Greece–naked–she got offended in a way that seemed to come from left field. Rebecca, the Arkansan, has her buttons pushed quite easily if the shortcomings of the South are brought up. I live in the South, as do Carolyn and her sister, and none of us seem to think that it is some sort of wisteria-covered paradise. Sometime, before the week is over, I will solemnly assert that the best thing that has happened to the South has been an influx of Northerners.

The names in my notes now mean nothing to me, whether I remember the person’s face or not. They are just names. There was a rodeo rider named Johnny Gas, according to my notes, but if I google that name I get Johnny Cash. There is a Walker Porter, DVM. The internet tells me that he is now retired, and that his wife of 55 years died last year. Someone must have gone to the desert endurance races in  the UAE. Maybe it was Dr. Porter. It seems fairly certain that he did head down to Guadalajara to be the veterinarian at some match races. The track wasn’t flat–the starting gate was on an uphill.

Lee Abbott taught part of the course.One thing that annoys me about about writing courses is that the book signing session, with the weird sort of pressure to by a copy. Does anyone want a signed copy of Strangers in Paradise, or Love is the Crooked Thing?

Ronnie Stewart–trainer  a three-word note says. He is on facebook, and is still working with horses.

Another forgotten rodeo cowboy, a note–probably a quote from Abbott–to “exhaust the emotional possibilities of a moment.” I am sure that that is not one of my ideas.

Here’s an interesting quote, but I can’t give it proper attribution:

“The American Cowboy is most overrated work in the U.S.”