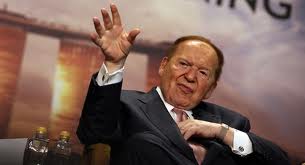 Besides the fact that being a Jewish Republican is already an obscenity, Mr. Adelson’s wasted $5,000,000 bribe (a bribe is a gratuity given in advance with the expectation that a favor will be done) to  the  Gingrich campaign is an embarrassment to Tribe members everywhere. Adelson admittedly gives lot of money to lots of worthy causes, which anybody with that kind of money is obliged to do. But  the Adelsons, who tout themselves as  the  “World’s Wealthiest Jewish Couple” on their own website, should consider what else they can do with that money that would promote the interests of World Jewry. $5,000,000 would put 16 kids through a Jewish day school from K-8. $5,000,000 would help synagogues be able to hire 200 Hebrew school teachers. $5,000,000 would send at least 1000 kids to Jewish summer camps (the proven #1 way to keep kids affiliated). $5,000,000 would make a nice donation to American Jewish World Services or any number of organizations that feel that it is their Jewish responsibility to go out and improve the world.

Yes, Israel relies on the United States for its existence. But bribing the Great Adulterous Marshmallow because Obama is supposedly a threat to Israel’s existence? Even the Wise Men of Chelm couldn’t have come up with this one.

One thought on “Jews We Wish Were Gentile, Volume IIa”