THE TRAGEDY (?) OF DAVID GUMPERT, PART THE SECOND 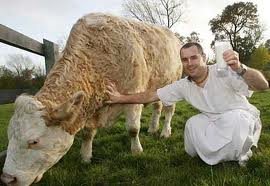 Mr. Gumpert had cancer of the prostate. All things considered, I don’t rate this as tragic. Unfortunate, yes, but certainly not down in the depths as was the case with Frank Zappa,  whose prostrate cancer struck at the age of 53 and was fatal.

With Zappa’s death, the world was deprived of an unusually sharp wit coupled with a virtuosic musical talent and an incredible knack for humor and originality. (I am in no way saying that Zappa’s life was worth more or less than any other human being’s. But I feel free to compare their works.) Mr. Gumpert, on the other hand,  is a sort of reverse Carrie Nation, wielding his hatchet so that we can drink something instead of having it prohibited. Like Ms. Nation, Mr. Gumpert will probably not achieve any long-term success. I believe that raw milk will continue to be a highly regulated substance, consumed only by a small part of the population. Most Americans, I imagine, are to be content to drink inexpensive, safe milk.

IF YOU’RE GOING TO OBSESS ABOUT ONE THING, YOU’D BETTER PICK A GOOD ONE.

But while raw milk is a bagatelle, prostate cancer is a serious problem. It is also an extremely complicated problem. there are a lot of unanswered questions that come up after the doctor’s glove comes off:

Should all men get PSA tests?How often? Is it different for those with a family history of prostate cancer? How do we know when a biopsy is called for? What is the best way to biopsy? What are the consequences of false positive tests? How can a patient find the best surgeon? How can we be sure that the media is conveying this information accurately? How do we get the correct information to the men at risk? How do we deal with the fact that men tend to be such poor patients? Can we change the behaviors of men to make them act more in their interest as patients?

So here is a very real public health problem, suffered by someone who is actually a real journalist. He has an audience. He knows how to meet a deadline and get his material out. He has connections with trusted publications with large circulations. He is in a real position with the help a lot of men parse out the difficulties of a very difficult disease, one that even if it doesn’t kill, strikes at the very core of what it means to be a man. And yet, he chooses to be the bandleader for a small group of fanatics, many of whom have an economic interest in the outcome of this bizarre fight. The Complete Patient (which is neither complete nor about patients) doesn’t even say if  Mr. Gumpert is so interested in raw milk  because he believes that it cured his prostate cancer.

I don’t think most of his current readers are interested in real and pressing public health and health policy problems. If so, it seems to follow that he would’ve been writing about them more regularly. There are, however, plenty of worried people out there with plenty of questions about problems other than the single imaginary one dealt with in his blog. With all the monomaniacal energy expended on something that really isn’t a problem, one can’t help but wonder if he couldn’t use all this energy to perhaps give the next Zappa a few more years.

One thought on “CAN’T WE FIND BETTER THINGS TO WORRY ABOUT?”