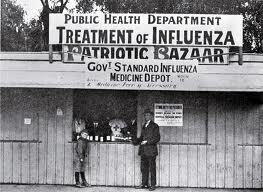 I just got a chilling thought.

If I get influenza this winter,

I am fucked. Really fucked. Why? Because I have no friends here. None. If I missed work, someone would call and wonder where I am, but other than that, no one would check up on me. I would have to go to the store and spread my germs, because I wouldn’t have any other way to get food. In addition to the pain of illness would be the added pain of isolation and fear. My 11 year-old daughter would be worried and try to make sure I was OK, but she’s just an 11 year-old who would be in the custody of her mother , Fräulein Schadenfreude, who really hates me and might even take some cruel pleasure in the fact I was alone in my misery. Not that she’s bitter or anything.

I’ve had the flu before. It was debilitating. I was febrile and in pain for a full week. Yeah, sometimes it’s “just the flu”, but at other times it’s the disease that kills around 36,000 Americans per year ( a lot more  Americans than Ebola, West Nile Virus, Eastern Equine Encephalitis  will). Fortunately it’s rare, but other times flut has been the epidemic that has knocked off 3-5% of the world’s population. It’s not the flu—it’s the ‘flu, dumbspeak for influenza.

All in all,I was well cared for. I was at my girlfriend’s mother’s house.  We had driven down to Atlanta for Christmas(see what happens when you date a shiksa!) , and it was my first time meeting the family. I think I made a good first impression.

People with strong connections heal better and are in better general and mental health. Living in isolation is toxic—it can literally shorten your life. What is the worst punishment we can give (short of the death penalty)? Solitary confinement. Lock ‘em up, and let ‘em go nuts.

So winter’s coming up. Whaddaya gonna do?

First of all, don’t be a moron, and go get your flu shot.

Your immune system is not a muscle. Don’t think that by “stressing” it with exposure to a virus is going to make it stronger.  The flu shot cannot give you the flu, nor will it cause autism, cause narcolepsy, or make you vote for Rick Perry. Unless you are allergic to eggs or religiously opposed( a weak reason, in my humble opinion), there is no reason not to get it. If you are under 50, get the intranasal—it shows better efficacy.

What population needs vaccination the most? School-age children. They run off to the viral exchange facility 5 days out of 7, and they are the super spreaders of the disease. If you want to protect infants and the elderly, it’s better to vaccinate school -age children than vaccinating those groups. I’m not going to argue science with whackos who think that vaccines are poison distributed widely. They can join my raw milk friends and throw a party. Go get your children vaccinated, or you are a parasite worse than Echinococcus multilocularis.

I worked at a horrible corporate veterinary practice where the manager (where do they find these people? They went through 5 managers in a little over a year. The Company bought into the ridiculous Business School Conceit that if you know how to manage a convenience store you also know how to manage a machine shop or a veterinary practice—the falsity of this claim was demonstrated on a hourly basi, oh how we loved the days when she was off! ) Anyway, as I was saying the manager announced at an office meeting one day that “if anyone is sick and can’t come in to work,  you still have to come in unless you find a replacement.” My response was, “As soon as I hear of anyone coming in with a fever, I’m leaving, and I will recommend that anyone else leave.” I don’t see why the employees should have to do the manager’s job of finding a replacement (other than the manager’s desire to shift the blame off of herself, in addition to  cruelly burdening a sick person with a bad task). And it is sheer lunacy to have sick people come into work. Massachusetts is contemplating a paid sick leave law. Only slavemasters and fools (aka “job creators”) would oppose such a law.

Thirdly, make sure you’ve got some strong connections.

If you’re sick, you’re going to need friends. If you’re not, they are going to make your life better. Remember: it’s a long winter.